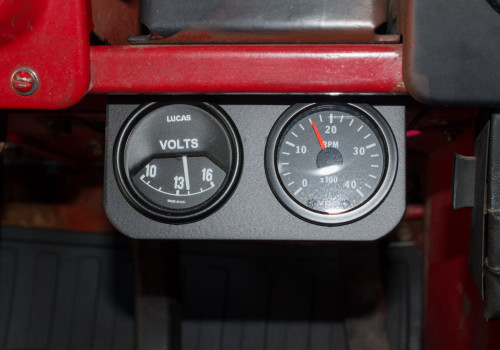 A quick explanation is in order here. The ammeter has a needle that swings back and forth to tell you whether or not your battery is being charged by the alternator. Never heard of an ammeter?  That’s because they are rarely used these days.

The reason you don’t see them much is because all of the car’s electrical stuff runs through this tiny gauge, and if it fails, you lose everything electrical in the car. You can’t exactly have that in a car with power windows and door locks, not to mention a sun roof and electronic ignition.

But in a classic Land Rover like mine, ammeters of old did the job of telling you all that 12V power in your battery was being topped off as your alternator ran off the fan belt. The needle would hover in the center, move towards a plus sign when charging or to the minus sign when discharging.

What I discovered was that my ammeter had long been disconnected, and was just a pretty little gauge face with the needle hanging straight down by gravity, centered, giving a reading that falsely implied all was well.

After my battery kept dying, I replaced the alternator, and then discovered the disconnected ammeter. I wondered whether or not to reconnect it at that point, or maybe buy a new one.

In searching for a replacement, I discovered that my best sources were in Cyprus or Australia, and a new old one would cost me at least US$75.  Ouch. Yet, my research revealed something more, that it wasn’t such a great idea to replace the ammeter.

In fact, there is probably a good reason why it was disconnected in my vehicle. With all that juice running through the tiny gauge, I read accounts where it had started a fire. I imagined smoke pouring out of my dash, me with a screwdriver in one hand and a fire extinguisher in the other. And as fast as I am at removing the five screws that hold my metal dash, trying to save my Land Rover (while holding my breath, of course), I didn’t want the risk.

I wondered if there wasn’t a better way to monitor battery health and charging, and I called Nisonger Instruments in Mamaroneck, NY for advice. I had noticed they had a classic style voltmeter on their website during my ammeter search.

Peter at Nisonger was super helpful answering my questions and telling me about the options and explaining the advantages of a voltmeter and the simple install process. After our brief discussion, the Lucas E-Type voltmeter for Series vehicles was my selection.

This voltmeter has a metal housing and uses what is called an “Aircore movement,” which has integrated circuitry to control the needle movement using two separate wiring coils. This is more precise than the analog “d’Arsonval movement” found in my old ammeter which runs current through a single coil to move a magnetic indicator needle.

I opted for the smaller standard size 2 1/16in (52mm) gauge because the Series Land Rover does not have a great deal of room for additional gauges. I decided I would mount it in the narrow niche under the steering column next to the tachometer. I wired the common ground wires together, and the hot wire for the dash lights together.

I purchased a standard automotive two-hole panel which came with a set of four small sheet metal screws which work fine.

You just have to be careful not to install the panel too close to the front of the dash or you can’t slide the gauges in due to the lip of the lower dash blocking the top of the gauge panel.

The voltmeter worked great out of the box, and I immediately concluded it was more useful than the stock ammeter would have been.  Why? The engine must be running for the ammeter to tell you whether or not your alternator is charging your battery, whereas a voltmeter speaks to you, engine running or not (ignition key clicked on).

The volt meter says precisely what the actual voltage range is in your battery, even taking into account the electrical load you might be using if you have other things going like your lights. With the engine running, the volt meter shows you clearly how much voltage is going into your battery.

Therefore, both at start up and while on the road I find the voltmeter much more reassuring.

My Lucas voltmeter has been in use for over six months now and working in a dynamic way from engine idle to high revs with true over the road reassurance.

If we consider the information provided on the Series metal dash, we’d list fuel amount, RPMs, engine temperature, high beams, miles per hour, oil pressure, and with my new voltmeter–electrical power.  This is the way a classic Land Rover to speaks to us as best it possibly can, using the language of gauges and indicator lights.

What is that mobile phone doing in the old ash tray? This Land Rover has GPS, too!